This afternoon I suddenly hit a winning streak, and wrote just over 4000 first-draft words in eight hours, when I normally reckon to write 1300 in four, and then lie down in a darkened room. Or go out and conquer the world. I think it helped that it was the end of the chapter and took me to exactly half-way through the novel, and that I knew exactly what needed to happen - well, almost. Having spent much of the last five chapters making two people who shouldn't be falling in love do so, and manoeuvring them into a situation where they might get it together, I suddenly wasn't sure if they actually did. I made a decision on the fly, instinctively, and I hope my instinct led me true.

My first drafts are sometimes very first draft indeed, mind you. The facing page of the notebook is full of scribbled notes:"add choreography", "sounds drippy", "would he say this?", "add sensory detail", '"awk" (awkward phrasing), "NQR" (not quite right), "PL?" (is this period language?), or "sort out", when I've made too much muddle of a sentence, in all its crossings out and reversals, to get it right now. The facing page is also full of extra bits, and occasionally when I realise I've got a whole set bits in the wrong order, I number each and then scribble the order they should be in. And then I type it all up, sorting everything out, except for the ones I can't sort out now, which all go onto another list of notes - maybe a hundred per 13,000 word chapter.

Not that it matters to anyone reading this, because every writer eventually sorts out their own True Belief about what works for them, and there are no rights or wrongs.* For me, my method stops me fiddling, or using polishing or 'just catching up' as a form of procrastination: spinning new words from nowhere is much harder work than titivating words that already exist, and it's easy to persuade yourself that you're working when you're just pushing commas around. Those corrections you can see are made on the fly: anything that isn't tweaked as I write stays untweaked till the second draft, and I never go back more than a few pages: the fact that it's hard to read fluently helps me to resist the temptation to hang around listening to the sound of my own voice. It also means that I when I come to type up I can see my thought processes in every change of mind, which saves all those times on screen when you change something, only to realise three weeks later why it can't be like that. I can do a quick sketch of the rooms in a house or a family tree, or an order of events which aren't in the story. It means I can turn the computer off - no checking email or getting involved in a forum. I can write anywhere, without so much as a plug, and I don't need my glasses. I number the pages (the ultimate hangover job) so I can keep a wordcount which turns out to be surprisingly accurate. I can even see whether the writing was like pulling teeth - my already messy handwriting goes all wonky and uneven and it's full of excisions and amendments - and then I'm on the alert that it'll need lots of work. Or was I on a roll? Suddenly it starts to swoop along, even and fluent. Those are the sections which seem to need very little revision.

But the chief benefit of my slightly odd working method is that it's fast. If I have a thought about changing something already written, I make a note on the ever-accommodating facing page. If I have a thought about something I haven't written yet, I do the same, and as long as I never throw away a note till I've done something about it, all will be well. In short, I do everything I can to keep steaming ahead, writing in the same order, and as near to the same speed (though still nowhere near) as the reader will read. 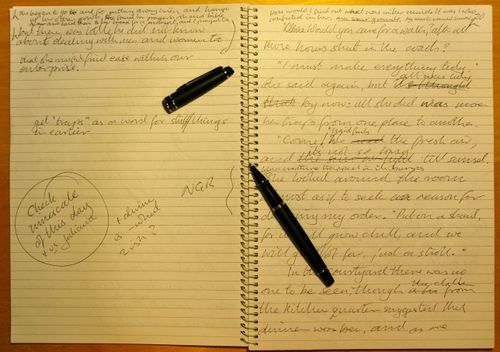 The point about speed is that one of the fundamental challenges of writing a novel is learning to experience it as a reader does. In other words, if you're looking at a single hair, you won't know if the skeleton's well proportioned. And while the writer should at some stage take as long as it takes to find the perfect word, for every word, that's probably incompatible with knowing whether Chapter Six seems to be as soporific as Mr MacGregor's cabbages, or skates past the reader's eyes leaving no trace in the brain. In writing fast I'm building the bridge, planting the big piers firmly in the ground and watching to see if we're heading straight for the far bank. And if that means using rough planks and tarpaulins for now, that's okay. I shan't be asking anyone else to walk across it for a fair while yet.

*Though even the suggestion that there are no rights and wrongs, only your own True Belief, is subject to the usual caution: try lots of methods out, but have confidence in what's right for you in the teeth of those who tell you otherwise, but, most importantly, recognise that if you feel yourself recoiling with particular ferocity from a suggestion (as opposed to regarding it with indifference ) that may be your unconscious telling you that you should try it, because it's just what you need.

Emma, do you really write so many words out long hand? BIG respect to you! I sort of wish I could, but I can't. I do find it fascinating to hear how other writers work. I don't think I've really found my 'way' yet, sadly..

I nearly fell off the chair when I read this post. I do pretty much the same - write on one side of the notebook, put in notes,reminders and extra bits on the other side, all in longhand, then type up ther complete draft as it is. The only drawback is my first drafts are very long, and even as I'm typing I think 'This will go when I edit',yet I keep it all in at that stage because it helps me see the characters and scenes, so gives a dapth even if it doesn't end up in the final version. I'm normally so envious of people who write straight onto the computer, as my method seems so cumbersome and inefficient by comparison. Thanks again!

Caroline, yes, I really do. I'm a reasonably fastish ten-finger touch typist, and my handwriting and typing speeds are pretty comparable, so it's not that one's quicker than the other. But I absolutely know that there's less translation that needs to go on between my brain and my pen, than there is between my brain and the keyboard. It's like the difference between analogue and digital sound recording, I think: to record things digitally they have to be broken up into little bits, whereas a whole handwritten word has its own whole shape and nature.

Rebecca, I think that's really interesting - it sounds like your drafts are full of what I'd call process writing. You do have to do it, don't you. Indded, one of the things which made me know that longhand was right for me, was that I realised that I brainstorm in longhand - spider diagrams, maps, ideas, lists. I think it can be hugely helpful to think of a first draft not as a first attempt at the finished novel, but as one huge brainstorm. Then it's much easier to accept the process writing, the cul-de-sacs, the temporary place-holding NQR words... you don't have to get brainstorming 'right', after all, it's the process of doing it which matters.

I do type up at the end of each chapter, though. A couple of times I've written the whole novel, and apart from the fact that I got RSI typing that much straight through, it is actually quite handy to have reasonably searchable versions of what I've done so far, if I really need to find something. Plus it means that if you lose a notebook...

My writing process has changed for my second novel. My first (which will be out in a year or so, seeing as you ask) was straight onto the computer with no real plan at hand, just a vague arc of the story in my head. It had its advantages, I suppose (feeling my way into the voice and the story simultaneously), but I do think it was a pretty inefficient process overall. I stopped - sometimes nearly sixty-thousand words in - discarded the pages, and went right back to the beginning at least five times. With the second book I've planned it to within an inch of its life; so much so, that I don't really want to start writing it proper. I mean, it's a masterpiece - the plan tells me so - so why despoil it with my plain and awkward words?

Two extremes: Will Self, I read, pretty much plans beforehand every page of his novels. The wall above his desk is furry with yellow post-it notes tracing the story. On the other hand, Virginia Woolf's entire plan for Mrs Dalloway was six bullet points. Six bullet points.

I'll still write straight onto the computer, though. I tried long-hand for a short story and, for reasons I can't quite work out, it didn't feel very natural. I don't think I liked holding a pen. It was as if it was just this pesky thing getting in the way of me and the words, whereas with my laptop it's like the words are coming right out of my fingertips and onto the page.

Phillip Roth writes long-hand, standing up at a lectern (but I think he's got some back problem that forces him to do that).

I love reading about how we writers work - it is as individual as our voice! I used to write long hand when I was in high school, but now, I write everything on the computer. My fingers don't move fast enough with the pen to get my thoughts down. However, I do have a notebook or journal that I use for each novel. I write down my notes and anything else in here pertaining to the book and always carry it with me.

This is only a preview. Your comment has not yet been posted.

The letters and numbers you entered did not match the image. Please try again.

As a final step before posting your comment, enter the letters and numbers you see in the image below. This prevents automated programs from posting comments.

Having trouble reading this image? View an alternate.

(You can use HTML tags like <b> <i> and <ul> to style your text. URLs automatically linked.)

(Name is required. Email address will not be displayed with the comment.)

The Mathematics of Love

Get Started in Writing Historical Fiction