This Itch of Writing

Join us to discuss the Art and Craft of Writing Sex 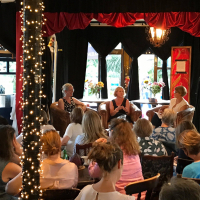 Words Away Salon with Jacqui Lofthouse on Be Your Own Writing Coach The Words Away Salons are back after a slightly extended break while Kellie was in Australia, and next Monday, 10th February, we're thrilled to welcome acclaimed novelist and short fiction writer Leone Ross who joins us to talk about the art and craft writing sex in fiction. It's a perennial problem - opportunity - hot topic - in writing, because (I reckon) it poses all the same problems as writing anything else, only much, much...harder, shall we say? Kellie and I will be cooking up some questions for... Read more →

I've pondered the odd business of writing sex before, but a good post by US writer Sebstien de Castell, about writing fight scenes, made me start thinking about it again. Sex and violence are hard (that's only the first double entendre) to write because both kinds of arousal involve an altered mental and emotional state which interacts with relatively complex choreography; what happens isn't built of words even if words are involved. Fiction has the same complexity, because it tells stories through characters-in-action as drama does, but in nothing but words. It evolved so richly because it can evoke and... Read more →

Posted at 02:38 PM in A Secret Alchemy, A Writer's Life, Craft, Genres, In Bed With, Point of view & narrators, Short Stories, Technique, THE EXPEDITION, THE TOOLKIT, THE WORKBENCH, You and your writing | Permalink | Comments (22)

It's nearly NaNoWriMo time, but every now and again, when I'm talking about the shitty first draft and other NaNo-ish concepts, someone says "I don't understand why anyone would want to write shit." Of course the idea is not that you want to, but that it may help if you accept it may be - well - shit. For many writers running every word through the shittiness-censor before you allow it onto the page may not be the best way to get and keep the creative imagination working at novel-scale, or at all. But there's no denying that for some... Read more →

Posted at 10:08 AM in A Writer's Life, Craft, Creativity, Events, In Bed With, Short Stories, Teaching Writing, Writing, You and your writing | Permalink | Comments (21)

Sex in the news, and other historical moments

A bit of a round-up post today. Fancy going to bed with a good e-book? You may remember that a couple of years ago I had a story in an anthology of erotic short stories, In Bed With... along with writers like Fay Weldon, Ali Smith and Stella Duffy. The conceit of the collection is that we're all writing under pseudonyms, and in Writing Sex and Ringing Tills I blogged about why so many writers find writing sex difficult, and why some of us therefore find it extra-interesting. Today's news is that it's just come out as an e-book. That... Read more →

Posted at 09:15 AM in A Writer's Life, Book Trade, Books and reading, Events, In Bed With, Short Stories | Permalink | Comments (3)

Strangers on the bus and lovers in the bed

Noel Streatfeild had a "bus test" for whether she'd developed her characters well and deeply enough: if you saw the family on a bus, would you recognise them? (If you're a Streatfeild fan that's a great site, by the way). It's obvious what the central characters - the ones Forster called round characters - in your novel need, even if it's not so obvious how to set about it. But what about flat characters? What if the world you're working with has a huge number of peripheral characters? How do you bring a bit of life to them, make us... Read more →

Posted at 04:34 PM in Craft, Genres, In Bed With, Teaching Writing, Technique, Writing, You and your writing | Permalink | Comments (2)

Jerusha Cowless, Agony Aunt: "I'm not a romantic soul, but my readers will want romance"

Dear Jerusha; I have interest in my novel from an agent who has sent me very comprehensive editing notes. One of her broader comments was that the novel would appeal to female readers, who would expect a more romantic approach to my main protagonists' relationship. She wants me to show the sexual tension and electricity, flirting etc. that accompanies a new love. I agree that it will improve the novel and make the way everything goes wrong towards the end more heartbreaking, but I'm not a romantic soul and am long past my sell-by date. I had carefully avoided the... Read more →

You can't have one without the other

One of the things I've noticed, among the more thoughtful and less ooe-er-vicar-ish of the reviews of In Bed With, is that they often say, 'Some of these are real erotica/only erotica, whereas others are short stories with sex in them.' The 'real/only' division is the giveaway: do they approve more of the former, or the latter? The more I think about this difference, the more I begin to feel that it actually reflects a much wider question about what fiction's for, and how it works. This anecdote is relevant, so stay with me. I think it's Don McCullin who... Read more →

Posted at 10:45 PM in A Writer's Life, Books and reading, Genres, Historical Fiction, In Bed With, Photography, The Mathematics of Love | Permalink | Comments (4)

There have been times in the last few days I've thought that my head - my writing head, that is - would explode. Somehow, in just over a month, I've written longhand two first-draft chapters of Kindred & Affinity and after sixteen hours' sorting-out-and-typing of Chapter Two at the weekend, discovered that I've got 31,500 words. By the plan (which, of course, is never set in stone) that's a fifth of the whole thing, which would make it 10,000 words longer than The Mathematics of Love. Yes, there are already 150 separate notes that will take anything from a minute... Read more →

I've just received my invitation for the launch party for the erotic anthology In Bed With... Since there are twenty of us authors, it's hardly surprising that we can only invite a certain number of friends each, but now, apparently, demand from the press and media for invitations has been much, much higher than anticipated. Since the good folk of Little, Brown's publicity department know their stuff, have run one or two launch parties in their time and so must know what the usual rate for accepting invitations is, I can only come to the staggeringly original conclusion that Sex... Read more →

Real people, even if it doesn't always look like it.

Today's amusement - which I was somewhat in need of while I waited in all through a brilliantly sunny afternoon for DHL to come and collect the proofs of the US edition of A Secret Alchemy - is that apparently several national newspapers have been trying very hard indeed to find out who wrote which of the stories in In Bed With. Emails have been whizzing round, beseeching all 24 of us to keep everything under our hats. I can't say that half Fleet Street's outside my door, but I gather there's been a certain amount of pressure exerted in... Read more →

The Mathematics of Love

Get Started in Writing Historical Fiction